Enjoy our fantastic range of Italian tastes. Whether you're looking for an under the radar gem, a highly regarded producer, a name you recognize, or just a delicious and inexpensive bottle to drink on a Tuesday night, we're committed to finding you the perfect one. 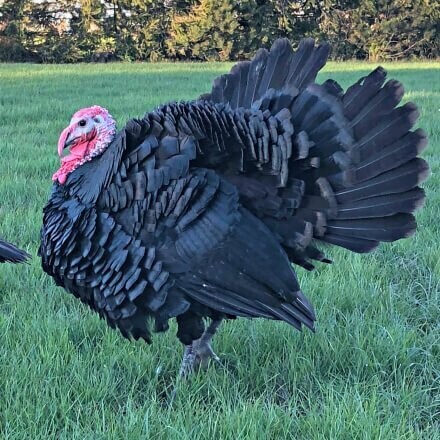 Orders are due ASAP

Get the whole turkey cut in 8 pieces and vacuum packed per piece add's 0.80 cents per pound. Then you can freeze what you do not need and stays good in the freezer for a full year.

Definition of a Heritage Turkey

All domesticated turkeys descend from wild turkeys indigenous to North and South America. They are the quintessential American poultry. For centuries people have raised turkeys for food and for the joy of having them.

Many different varieties have been developed to fit different purposes. Turkeys were selected for productivity and for specific color patterns to show off the bird’s beauty. The American Poultry Association (APA) lists eight varieties of turkeys in its Standard of Perfection. Most were accepted into the Standard in the last half of the 19th century, with a few more recent additions. They are Spanish Black, Bronze, Narragansett, White Holland, Slate, Bourbon Red, Beltsville Small White, and Royal Palm. The Livestock Conservancy also recognizes other naturally mating color varieties that have not been accepted into the APA Standard, such as the Jersey Buff, Midget White, and others. All of these varieties are Heritage Turkeys.

Heritage turkeys are defined by the historic, range-based production system in which they are raised. Turkeys must meet all of the following criteria to qualify as a Heritage turkey:

1. Naturally mating: the Heritage Turkey must be reproduced and genetically maintained through natural mating, with expected fertility rates of 70-80%. This means that turkeys marketed as “heritage” must be the result of naturally mating pairs of both grandparent and parent stock.

3. Slow growth rate: the Heritage Turkey must have a slow to moderate rate of growth. Today’s heritage turkeys reach a marketable weight in about 28 weeks, giving the birds time to develop a strong skeletal structure and healthy organs prior to building muscle mass. This growth rate is identical to that of the commercial varieties of the first half of the 20th century.

Compare that to Industrial Turkey

Today’s commercial turkey is selected to efficiently produce meat at the lowest possible cost. It is an excellent converter of feed to breast meat, but the result of this improvement is a loss of the bird’s ability to successfully mate and produce fertile eggs without intervention. The Broad Breasted turkeys require artificial insemination to produce fertile eggs.

Cancelation must be before 7 days to Thanksgiving

Save this product for later
Display prices in: USD

Use this section to build trust and create a personal connection with your customers. The more a prospective customer knows about you, the more likely they are to purchase from your store. Use this section to explain why your store is the best place to purchase the type of goods you sell. Be sure to highlight the things that make your products and services unique. For example, are your items made locally, sourced from special ingredients or customized? This is the place to tell your customers how great your products and services are. Leave a memorable impression that makes them want to tell their friends about you and come back for more. Free shipping? Do you support a charity? Let them know here!

Insert a customer testimonial or a favorite quote that describes your business motto.

Here you let your customers get to know you. Tell them a little bit about yourself and why you created this business. Do you have a passion, hobby or life experience that inspired you to get started? Do you have special skills or training that make you an expert in your field? Show your customers that there are real people with interesting stories working behind the scenes. Helping customers feel connected to you and your purpose will inspire more trust in your brand.

Use this space to list your offline location(s) and alternate places where your goods can be purchased online or in person. Be sure to include your full physical address if you have a physical store. Leave this section empty if your goods are only available in this online store.